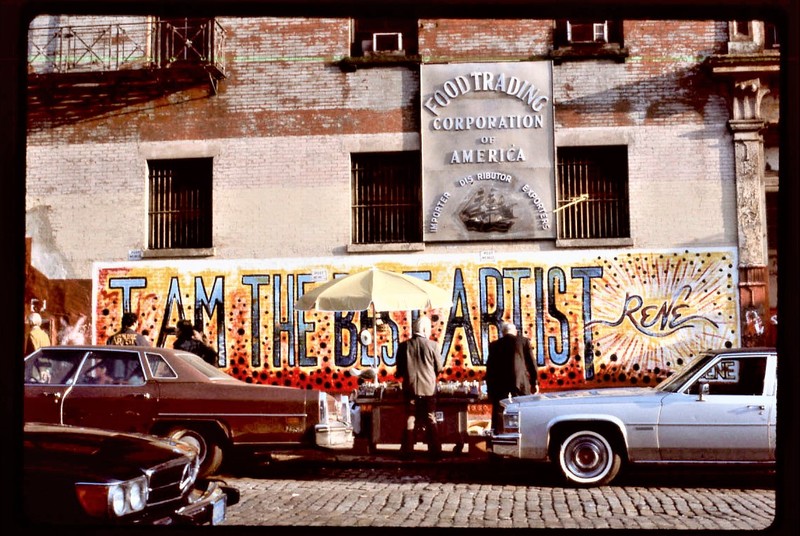 In early 2017, Carole Teller, a retired art teacher, approached Andrew Berman, the director of the Greenwich Village Society for Historic Preservation, with a box.  It was gathering dust in her East Village apartment, and contained a personal collection of photographs from the 1960s through the 1990s, some of New York’s most transitional years.

The Greenwich Village Society for Historic Preservation works to “preserve the architectural heritage and cultural history of Greenwich Village, the East Village, and NoHo.” They recently made Teller’s images available online as Carole Teller’s Changing New York, stating that “Carole captures the poignancy and beauty of a city in flux.”

Instead of simply adding the images to the organization’s archive, Berman chose to promote  them. News sites like Time Out Magazine, Gothamist and Bowery Boogie raved about the newly discovered photo series. NBC New York called the photos a “treasure trove.”  Berman agrees. “The photos are a really important record that tells us about the way our city has changed,” he says. “It’s easy to forget these things.”

While most of the photos capture the East Village, the series also depicts Brooklyn (where Teller grew up) and other parts of Manhattan. They often focus on architecture, as well as scenes on the street level. Even though Teller is an accomplished painter – currently affiliated with Gallery 71 and the Salmagundi Club – she never considered herself a photographer. When asked about her camera of choice, Teller says she used a simple old Pentax.“I’ve always taken photos, but it was never an organized effort,” she says. “I just take pictures.”

Teller explains that she never had the privilege of being an artistic “lady of leisure.” She always enjoyed painting, but needed to make a living. As a result, she taught art in New York City public schools for 32 years, putting her personal art on hold. However, she started painting again after she retired. Teller says that she didn’t really have a choice; she felt compelled to capture things. Much like her photos, her paintings detail city life, from skyscraper landscapes to intimate settings on rooftops. When she didn’t have time to paint during her teaching years, Teller took photos.

“The photos bring me back to that time,” she says. “They are really a visual diary of my life.”

For Teller, photography was a way to document the New York she saw around her and a way to remember it. But to GVSHP, the photos are much more than that, stating that “as a photographer, she had a keen and often prescient eye, capturing in her daily travels, people and places that struck her, but which were also often on the precipice of change or disappearing.”

When asked their feelings on how New York has changed, Teller and Berman offer similar sentiments. Teller feels nostalgic for that past, and misses a version of New York that was quirky and more individual. “Everything is more homogenized now,” she says. She stopped doing as much photography when everything became more digitalized.

Berman, who also grew up in New York, laments the city’s “loss of character,” stating that it used to feel more “gritty, spontaneous, and less programmed.”

While looking through the photos, it is very easy to focus on what the city has lost over the years. Many of Teller’s image descriptions contain the phrase “demolished.” Some photographs depict scenes of cranes and trucks coming to tear down the old and cart aged bricks away. One shows the NY Tribune Building near City Hall, which was demolished in 1966 and replaced with Pace University. One of her most popular photos features the beautiful old Penn Station before it was dismantled in 1963.

However, Teller and Berman also appreciate the changes in New York, as well as the more “programmed” world that comes with it. When discussing the process of bringing her photos to light, Teller says that “digitalization made it possible.” She went to Print Space on 21st street to have her old photos digitalized for the GVSHP archive. Meanwhile, Berman’s painstaking process of finding the location of each of the photos required tons of online research (and Google Street View).

Berman and Teller recognize the benefits that come with the changing New York.“The good over the last several decades is less crime. It’s cleaner, safer…” he says. Teller even found a home within her changing New York. One of her photos depicts a man standing in a building that is set to be demolished. As happenstance would have it, Teller later lived in the building that took its place.

“Whether you view the changes as good, bad, or you’re indifferent, people love these photos,” Berman says.

Berman’s favorite photograph showcases posters wheatpasted to a building. He was a “sniper” or “wheatpaster” when he was younger, and this photo reminds him of those days. Teller was unable to pick a favorite, but hinted that she had more to share. Perhaps we will soon have another batch of Carole Teller’s Changing New York to take us deeper.

Despite our lamentations for the past, change is an inevitable part of every city. That’s why it’s important for organizations like GVSHP to keep their photo archives, so that even as parts of the world are changed or demolished, we have a history to look back on. And Teller’s photos are even helping to do that. All the photo prints are available for purchase, with proceeds going to GVSHP and their cause. Thus, even as they are shared online and help us remember an older New York, Carole Teller’s photos help us preserve it as well.

The full collection of Carole Teller’s Changing New York is available on the Greenwich Village Society for Historic Preservation Image Archive here. Prints of the collection are available for sale on the website with proceeds benefiting GVSHP.