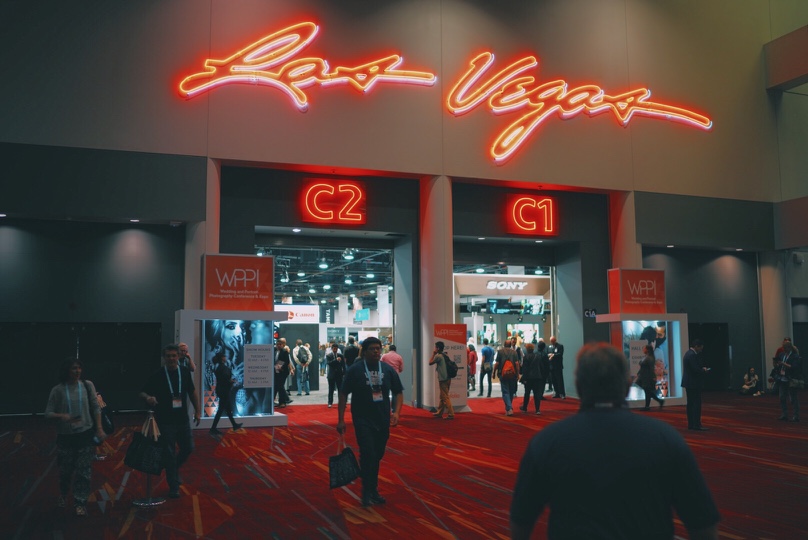 Punxsutawney Phil predicts six more weeks of winter, but that won’t stop us from counting down the days till wedding season! Lucky for us, the Wedding & Portraits Photography Conference came through just in time to sustain us. We sent a team to Las Vegas last week, including our resident wedding photographer Matt Nelson, to get the latest from the Wedding and Portrait industry.

“There were actually few couples who got married at the conference and people photographed them,” says Nelson. “I think that part of the deal was that they were going to get married anyway, and WPPI said ‘we’ve got a bunch of amateur photographers – get married here!’”

For those new to the scene, WPPI is a week-long industry conference and trade show created for the oft neglected “weekend warriors” of the photography world. Founded in 1978, it  features educational seminars designed to share the latest wedding photography techniques. “I wanted to go and get some tips for myself, learn more about the industry, where wedding photography is headed,” says Nelson, who did his first wedding shoot ‘out of curiosity’ a few years ago.

When he wasn’t valiantly manning our table, Nelson got to mingle and learn from some of the best in the business. “Joe Brady did a really cool landscapes workshop for us,” says Nelson. “He went through his process and techniques. You can definitely incorporate landscape into wedding photography, especially for weddings in countrysides ones in a big open field. Then we had Miguel Quiles, who did lighting on the go. He showed us how to put up quick lighting to take anywhere,” which is also relevant to wedding photography.

“A lot of it depends on the where you are,” explains Nelson. “Sometimes you’ll be at a venue with dream lighting, but other times you’re in a desert or out in the countryside and you don’t have anything. So, you need some of those quick things. There were some weddings I shot out in the country, where the bride and groom wanted to do something in the creek, and that isn’t the most picturesque thing you can think of.” Hence, jerry-rigging and quick thinking, he argues, are required tools of the trade.

As he wandered through the conference, Nelson says that a few companies really blew the crowd away with exceptional exhibitions. “DJI, the drone company, had a really cool booth,” he says. “They let you try out their drones and fly them. There was another company called Millers, who does prints. They had all kinds of prints on metal, canvas. They had the biggest booth at the show, and size-wise it really stood out.”

All and all, it was a fun, Casino-studded conference, where big names mingled with amateurs, and one South Carolina native got a special surprise on his flight West. “I was trying not to get my hopes up because I didn’t want to be disappointed,” says Nelson. “but I was pretty excited when I looked out the window and realized this was the Grand Canyon.”