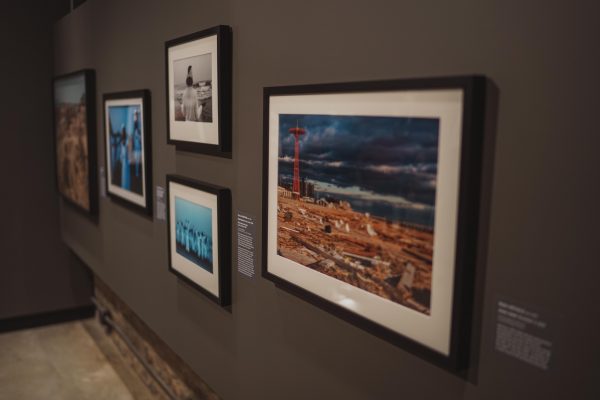 “The waterfront, like history, has its fluctuating moments – it’s high and low points,” says curator Marilyn Symmes. We make our way through Shifting Perspectives: Photographs of Brooklyn’s Waterfront, the inaugural exhibition of the Brooklyn Historical Society’s new DUMBO location inside the Empire Stores Building. Composed of 65 photographs, one short film by Rudy Burckhardt and 2 digital presentations, it explores the Brooklyn shoreline with work from 25 acclaimed photographers.

Sparsely peopled, the photographs encourage vicarious viewing. From Newton Creek to Coney Island, this visual survey is a sprawling expedition through New York’s most rapidly changing borough. In the real world, “people can only visit one place at a time,” says Symmes. But here, viewers witness the whole of Brooklyn’s changing waterfront through multiple perspectives – all at once. “You’ve got the perspective of the photographer, plus mine as a curator, plus the Brooklyn Historical Society, plus the visitor.”

With the ribbon cutting ceremony behind us, Symmes leads me to the front of the exhibit. There, we find Berenice Abbott’s iconic photographs of the Empire Stores Building. “These are the [images] that set the standard,” explains Symmes. “This is how the Empire Stores Building [looked] after roughly 67 years. For people to understand that you are in the same building that was a working warehouse very recently in historical terms, should be an aha moment.”

Indeed, the exhibition loves to explore the rebuilt and repurposed. It is, after all, Brooklyn. “This is Shai Kremer,” says Symmes, and gestures to a large digital collage on the other side of the front entrance. “In this particular study, he’s doing a photo montage of the historical waterfront with the gentrification of Williamsburg.” Part of his Brooklyn Gentrification Series, “Williamsburg Waterfront and Plaza” straddles an ambiguous judgement line. It’s filled with ghostly figures superimposed into a new, modern infrastructure. “He’s sad of the loss of the neighborhood character,” says Symmes, “but if we look at it through a historical perspective of civilization, it’s a cycle. He calls it, “accumulation, destruction and reconstruction as a paradigm of modernity.” He started out photographing the scarred landscapes of Israel.”

If native Brooklynites struggle with this line, then Symmes caters to their vision as well. “One of the important things for Robin Michals was to photograph the fisherman,” she says, and gestures to a picture of a family facing New York Harbor from the Louis Valentino Jr. Pier in Red Hook. “Are the fishermen going to be here in the future, or are they going to go?”

Shifting Perspectives also makes time for Brooklyn’s clearest revival, it’s most defining counterpart. “We’re looking at Dumbo from the Manhattan side between the two bridges,” says Symmes, pointing to one of several panoramic shots by Taiwanese-New Yorker Jeff Liao. “There are many images of the Manhattan waterfront, and I wanted to focus on the Brooklyn waterfront.”

It’s this view, moreover, that offers the clearest glimpse into Brooklyn’s industrial past. “Stanley Greenberg is very interested in photographing industrial structures, engineering feats,” says Symmes. “He does it in a documentary way. He’s very conscious of past photographic traditions.” His photograph, “Revere Sugar Refinery, Red Hook” was taken in 1993, but could easily pass for much earlier.

“Now this is a mini story about the sugar factory prowess of Brooklyn,” she says, moving to images from the Sweet Ruin: The Brooklyn Domino Sugar series by Paul Raphaelson. Brooklyn was the leader of sugar manufacturing in the late 19th century, but Raphaelson’s vision isn’t documentary so much as it is revisionist of the factory’s decline. The photographs look more like geometric patterns than historical records. “He got permission to go inside and explore around. It’s geometric, but hints at what the structure’s function was. Raphaelson had an aesthetic vision, yet he’s very conscious of the transitional moments.”

From there, we carry on to the display of images of the Gowanus Canal and then along the coast to Dead Horse Bay, where a sweeping photograph of a storm cloud overlooking a freighter dominates its own panel. “With Mitch Epstein, he worked in majestic black and white format,” says Symmes. His photograph, “Cloud #94” is looming as it is breathtaking. “His interest lately is rock formations and cloud formations, which can be viewed from New York City. He has an app on his phone and tracks where you can find amazing cloud formations. Clouds are ephemeral, yet they provide a sense of the awesomeness of nature.”

Finally, we make it what is easily my favorite part of the exhibition: Coney Island. “I chose to put the people where the people are,” says Symmes. And it’s true; Coney Island is a wonderful mess of communities. There are turn-of-the-century-bathers, Luna Park goers, sand castle contests, and the Polar Bear Swim. There’s Garry Pierre-Pierre’s “Haitian Immigrants Celebrating,” which documents a Haitian voodoo ritual. Chester Higgins’  “NYC: Dance to the Sea” features a ceremony to commemorate the middle passage. There are deserted images too, like Liao’s “Coney Island Fog.” Through space and time, it’s all here.

Shifting Perspectives carries the weight of an ever-changing Brooklyn. From industry and disaster to gentry and poverty, there is a gaze for every vision. “If visitors want to start the exhibition in the Coney Island section, instead of at the DUMBO section, I wouldn’t mind,” says Symmes. “That’s why I arranged the exhibition installation geographically, so that it could be appreciated in any order – as a snapshot of Brooklyn’s various neighborhoods captured at different times.”

Shifting Perspectives: Photographs of Brooklyn’s Waterfront is on display at the Brooklyn Historical Society DUMBO until September 10.