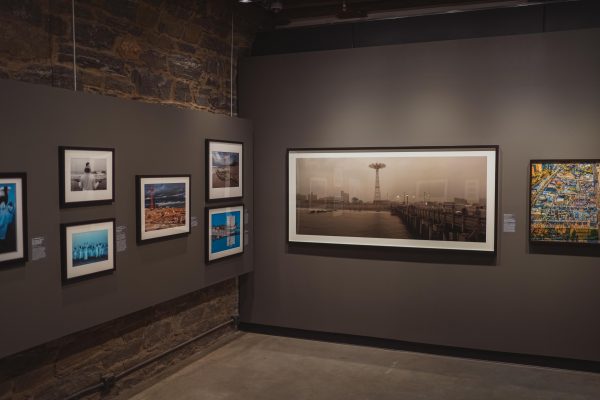 Summer is coming our way in Brooklyn. Whether we’re porch hanging, dog walking, coat check ignoring, or lemonade drinking – spending time outdoors is a given. However, for the days when it’s too hot to sunbathe, consider one of these excellent exhibitions in the New York area. Even if no one ever took a single photograph of Georgia O’Keeffe, we would still know her as the fierce, awesome lady who created groundbreaking oil paintings. Thankfully however, many have. Photographs of the renowned modernist, alongside selected paintings and items of clothing, are showing at the Brooklyn Museum until late June. With her defiant portraits and colorful dress, the exhibit illustrates a woman in control of herself and her vision. From families photographing rocky shorelines to tourists lounging at seaside resorts, Disturbed Coastal Systems studies the human presence along coastlines. Massimo Vitali transforms spaces of natural, epic beauty into playgrounds with cartwheels, swimmers, and cannonballs. His images beg the question: are these areas of conflict, or compromise? Flaunting brightly colored suits, flamboyant towels, and self-aggrandized subjects, Vitali forces the viewer to encounter the often unnaturalness of humans in natural spaces.

3. HELL and HOME at the Yossi Milo Gallery Combining two separate visions, HELL is a survey of western landscapes named for hell or the devil. HOME, on the other hand, explores remote desert locations with ramshackle houses – an attempt to dominate nature. Together, the gelatin silver prints address contrasting notions of place and origin. This inaugural exhibition commemorates the newly opened BHS DUMBO in Brooklyn Bridge Park. Featuring the work of 25 acclaimed photographers, Shifting Perspectives straddles the line between documentary and fine art photography with pictures of the dramatic Brooklyn waterfront. “Our aim was to link visitors to the water’s edge through inspired images created by some of the world’s great photographers,” says  Brooklyn Historical Society President, Deborah Schwartz. “We hope and expect that when people leave the exhibition and walk out to the park, they’ll look at their surroundings differently having experienced the work in ‘Shifting Perspectives.’”

5. Eugene Richards: The Run of Time at George Eastman House Deeply rooted in the harsh truths of American life, Eugene Richards nevertheless explores tough subjects like racism, poverty, emergency medicine, drug addiction, cancer, and aging with a kind of lyricism and beauty. As the first museum retrospective of his work, The Run of Time explores Richard’s career from 1968 to the present in 146 photographs and three moving images.

6. Muslim in New York at Museum of the City of New York From Arabs, Turks, Afghans, and East Indians to Albanians and African Americans, New York’s Muslim community is diversely and richly peopled. Muslim in New York captures the shifting landscape of Muslim-Americans in the 20th and 21st century. Featuring 34 images by four photographers documenting the Muslim-American experience, this timely exhibit explores the histories of one of New York’s most vibrant communities.

When summer gets too hot, it’s OK to turn back indoors. There’s plenty to see between Manhattan and Brooklyn, so make sure to get your fill of art this upcoming season!