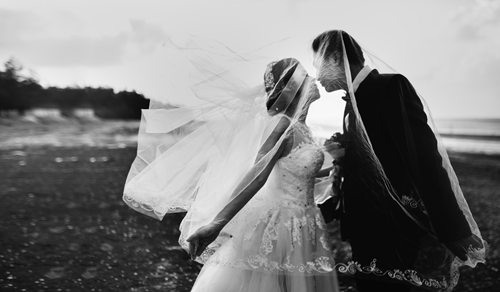 Wedding season isn’t for another few months, but the 2017 Wedding and Portrait Photography Conference is coming up in February! If you’re new to wedding photography, you’ll notice that some poses make the rounds more than others. Like the one where the groom sweeps the bride off her feet, or where everybody jumps in the air like a basket of loons. Many of these poses look great, while others fall decidedly flat. Happily, our resident wedding photographer, Matt Nelson, compiled a list of the best and worst poses to help you prepare for Spring.

This pose works best when the groom is a few inches taller than the bride. He embraces her from behind, and she looks wistfully into his eyes.

Real conversation is hard, but fake conversation makes for pretty memories. Pose subjects at the hip, and then ask them to talk about their day so far. (It’s their wedding day, so this should be easy). Snap a few shots of the bride and groom looking swoony and romantic at each other. Or a kiss!

This one is great for showing off what the bride and groom are wearing. Ask the couple holds hands far enough apart that their arms make a V-shape. Then, tell them to look at each other with only partially contrived tenderness.

This ol’ standby is a classic for a reason. Double check that the groom can lift the bride, and then ask him to scoop her into his arms for an ‘all smiles’ shot.

When done well, this pose is a real winner. The assistant flips the bride’s veil into the air to mimic a gust of wind, and then runs off screen just in time for the photographer to snap a still shot. It’s a whimsical crowd pleaser.

Cheesy, uncreative, embarrassing in fifteen years – there are many ways to describe this next pose. The couple makes a heart shape by touching fingers and thumbs across arms.

Better suited for dogs and babies than couples, the ‘peek-a-boo’ pose feigns a fun surprise. The person you’re getting married to! Who knew? Both parties stand on either side of a tree trunk, blinking dumbly at the other.

This pose works best when a member of the bridal party, likely the Maid of Honor, pretends to share a juicy secret with the bride. “Your fiancé has a secret first wife,” she might say. Then, they laugh and laugh. The photographer snaps a shot. Or, you can just use the groom.

Let’s all jump! Everybody jump! This is fun in theory, and if you’re really sold on it, then do what you will. However, keep in mind that if you just spent a gazillion dollars on your hair, the jump doesn’t do a great job of maintaining it. Also, it’s really, really hard to make a nice face mid-jump. This shot took twenty takes, and neither party looks their best.

This pose has a dark side. When done correctly, the veil flip works beautifully. However, when the pose itself is wooden, then the flip looks forced and awkward. Try adding some movement by asking the couple to walk forward. That way, their bodies match the dramatic flair of the veil.

There ya have it, folks. Every wedding is special, but if you capture it well, then it won’t turn out looking like the bad half of special. Speaking of: a very special thanks to Matt Nelson, Mari Pack, and Ken from the IT department, who sacrificed the well-being of his current relationship to pose for these fake wedding photos.