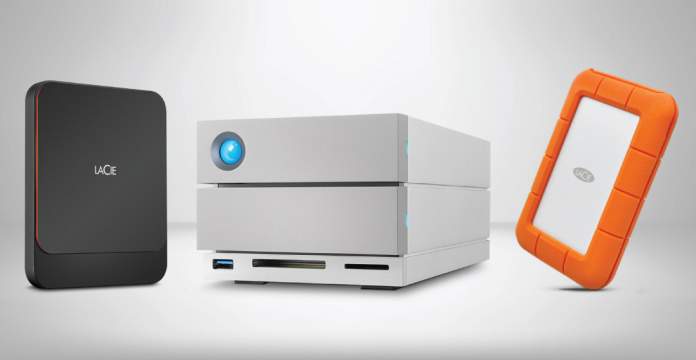 Have you heard the good news about World Backup Day? There’s now an entire holiday devoted to data storage.

Every year on March 31st, a group of heroes encourages the global community to back up all of their digital files and asks nothing in return. As outlined in their FAQ, this is not only a day for backing up your personal data but also a time to talk about the enormous task of preserving our ever-increasing digital heritage and cultural works for future generations.

That is one heck of an undertaking.

In an effort to do our part, we reached out to our friends at LaCie (the backup drive experts) and asked to speak to someone who could offer us some much-needed guidance.

Jonathan Bauder is that data guru. He is a 15-year tech industry veteran who’s spent the last 11 years working for LaCie and its parent company, Seagate. There, he wages a valiant war against one of the most pervasive threats to modern technology: data loss.

“My goal in life now is to help people avoid data loss,” he said, laughing during our call.

Bauder was kind enough to chat with us about the essential rules for protecting yourself against data loss, avoiding corrupted hard drives, and cleared up a few data-storage-related myths.

We discuss two types of hard drives in this post: hard disk drives and solid-state drives.

Myth #1: A good hard drive can last a lifetime if you take care of it.

Fact: The life span of the average consumer hard drive is 3-5 years.

A single hard drive is not a permanent solution for long-term data storage. In fact, the average HHD lasts only 3 to 5 years. Similarly, while SSDs are still new to the market, it looks like they have roughly the same life trajectory.

“There’s a whole other Pandora’s box on SSDs,” said Bauder. “SSDs are not good for long-term, unpowered storage…solid states are great for scratch disks. So, editing directly off the drive, running your phone or tablet, that kind of stuff.”

He went on to say that SSDs are great if you’re editing 4-8k videos on the fly. However, because of the way solid-state drives hold data, the internal charge they rely on dissipates over time making it tricky for people interested in carefree, multi-year storage. Myth #2: Once my data is on my hard drive, I can put it in a drawer and forget about it until I need it.

Fact: You must periodically plug in your hard drive to ensure it will continue working.

Well, this is half true. If you use a spinning hard drive, it doesn’t make a huge difference if you power it up every three months or two years from now. Your data is safe either way.

SSDs are a different story.

“Your data could literally evaporate off the drive if you don’t power it up every once in a while,” Bauder warned.

“The SSD thing gets kind of complicated…there’s a lot of variables. But every quarter, at minimum twice a year, connect it to your computer. Have it plugged in, powered up, and available. You don’t even have to do anything [to the drive].”

“There’s a ton of self-maintenance that SSDs have to do internally to keep the data, refresh all the bits, trash collection, error correction—there’s a lot of processing. And if you don’t let them be connected for a couple of hours every 6 months, they can’t do any of that. It’s very important for your data integrity.”

Myth #3: SSDs are indestructible and significantly tougher than HDD devices.

Creatives love SSDs and with good reason. They’re smaller, lighter, and quieter than the average spinning drive. As mentioned above, they also provide the kind of dynamic power that allows users to edit large files directly from the device. Plus, they’re significantly sturdier—in Bauder’s words, if an SSD falls down an escalator, it’s less likely to be affected by the impact than it’s HDD counterpart.

However, SSDs are much more susceptible to heat damage.

“The average SSD can hold data unpowered on a shelf for two years at 20 ℃,” Bauder explained. “If you raise that 5 ℃, it’s only 1 year. If you go to 30 ℃ you only get 6 months on the shelf. So, you don’t want to store SSDs in hot places or direct sunlight like the dash of your car. They’re much more sensitive to temperature.”

This is a very easy problem to solve once you’re aware of it—simply store your SSDs somewhere cool.

On the other end of the spectrum, spinning drives are significantly less vulnerable to changes in temperature but can’t withstand impact if they’re writing data.

“If [spinning drives] are on and running, they’re really prone to shock damage. The tolerances are amazingly small. The heads are spinning over the platter at 7200 RPMs with less than a human’s hair tolerance between the head and platter. If something goes wrong, that could be catastrophic.

“When they’re unplugged, the ‘Ruggeds’ can take up to a 6-foot drop, even the spinning drives. So unplugged they’re more durable. But being plugged in and running and writing data, you want to be more careful.”

Myth #4: If I have one reliable backup I should be fine.

Fact: You should always back up your backups.

Discussing worst-case health scenarios with a seasoned doctor is a unique, enlightening, and often frightening experience. They’ve seen a number of absurd, implausible scenarios that you and I can’t even imagine.

Speaking with a veteran data-storage expert has a similar vibe.

“I’ve been with LaCie and Seagate for over 11 years and I started out in tech support. I’ve talked to literally thousands of people who’ve lost their data,” Bauder paused thoughtfully. “So, I’ve become kind of conservative about other people’s data. I’m a little bit of an alarmist…but this is still good advice. What you need to have is a 1-2-3 strategy.”

First, you have a working copy that lives inside your computer or on a backup drive. Second, you create a backup copy on another drive. Third, he recommends having a “disaster copy.”

“Typically that’s offsite,” Bauder elaborated. “Have it in a safe, a safety deposit box, the cloud, whatever as long as you have [one].”

The 1-2-3 is a good basic rule for most people. However, the more critical or valuable your data is, the more copies you should have.

“I’ve talked to people whose entire businesses were on one hard drive. And if that hard drive died, they would have to shut the doors to their business. Something like that, you should have more than three copies.”

Over the past few years, ransomware has also become a serious issue for individuals and businesses alike.

“I’ve talked to some of the IT departments involved in [ransomeware attacks]…any device that’s connected to a computer will be encrypted and [the hacker] will try to extort you for the key. Having a good, separate backup can protect you from that.”

Myth #5: Multiple RAID drives are the perfect, complete solution for photographers and cinematographers.

Fact: Relying exclusively on RAIDs and data mirroring can be risky.

“RAID instantly mirrors what’s on that first drive. So, if you delete half your files, it deletes them off the mirror before you can even blink. If you get a virus, it replicates that virus to the other half. If the volume corrupts it mirrors that corruption.”

But fear not, dear reader, not all hope is lost for your beloved RAID. You can still feel free to use them as long as you use the 1-2-3 method.

But what about that ever-growing price tag?

“RAIDs are typically more expensive because it’s more complicated hardware,” Bauder explained. “So I tell people if you want to use RAID for your main storage, that’s great. But the backup doesn’t have to be another RAID. You can either get a bigger single drive and back everything up to something less expensive or split it up between a couple, smaller drives. You don’t have to break the bank to have multiple backups.”

This holds true when comparing the cost of additional devices with data recovery rates; it costs $3,000-$5,000 to recover a single drive. There are a few cheaper options (around $800) but none of them guarantee you’ll get your data back.

According to Bauder, only about 85% of data can be recovered and the remaining 10%-15% is not recoverable for any dollar amount.

“An ounce of prevention is worth a pound of cure. Whatever the cost seems like upfront, it’s still going to be cheaper than if you have to go through the pain and anguish of data recovery. And if you’re in that 10%-15% who is unrecoverable, it’s gone forever. And that can be really traumatic.” Fact: It doesn’t really matter as long as you’re using one of them.

We asked Bauder if there’s specific back-up software that recommends or if built-in programs like Mac’s Time Machine will do the trick.

“Built-in backup software is OK. I always tell people I don’t care how you do it—if it’s a drag and drop or software install—as long as you’re doing it.

“Usually, having software installed means you can set up a [backup] schedule which helps, even if you have to get the drive out yourself and connect it…It tends to help people back up more consistently than if they’re leaving it to themselves to remember to do it.”

Myth #7: If you use a Mac and a PC, you should use separate drives for each operating system.

Fact: You can use the same drive for both without any major problems.

Will the ongoing war between Macs and PCs affect the integrity of your hard drive? No, probably not.

“There are some basic formatting issues where a Windows formatted drive is read-only on a Mac and a Mac-formatted drive won’t even show up on Windows. But if you have a Paragon Driver installed so your computer can translate to the drive, there’s not a lot of issues there.”

Bauder’s parting advice is to make it your job to see that backups happen on a regular basis—prevention is better than data recovery in the event of an emergency.

How do you avoid corrupted hard drives and which LaCie products will you use to celebrate World Backup Day? On the other end of the spectrum, do you have any backup horror stories you want to share? Leave it all in the comments below!