As the most expensive part of the camera, camera sensor size has a lot to do with price as well as image quality. Bigger sensors have higher ISO, so they shoot better in low light. Bigger sensors also have more megapixels, which lets you blow up your image. Here’s what else you need to know.

Smaller than aptly named large format photography, but larger than traditional 35mm, medium format is a niche sensor size for committed enthusiasts and professionals.  While medium format cameras are mostly used for film photography, Hasselblad makes one heck of a medium format mirrorless in the X1D-50c.

Full-frame camera sensors act as the baseline sensor size because they mimic original 35mm film cameras. Unlike smaller four thirds cameras, these sensors are usually only found in professional or higher end bodies. Since the sensors themselves are larger, the cameras tend to be comparatively large as well (though obviously not as big as medium or larger format cameras).

There are a lot of benefits to working with 35mm cameras. They produce better quality images with higher ISO sensitivities because the larger individual pixels catch more light, so there’s less noise. At the same time, the bigger sensor allows for more pixels to be added in addition to bigger pixels. More pixels mean you can blow your image up for galleries and the like. 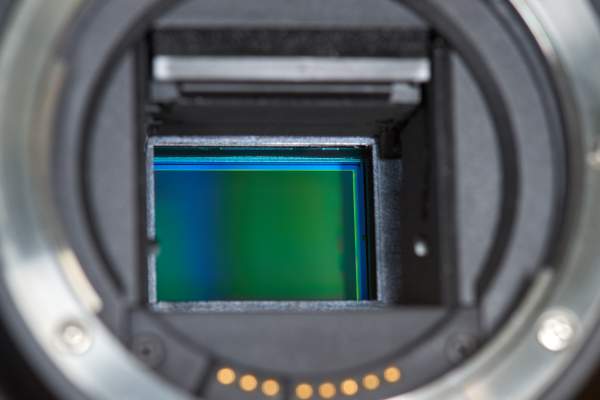 Plus, full frame sensors give you wider angle options. In ye olde days, digital cameras came with smaller sensors that captured less of the projected image than 35mm film. The resulting ratio disparity was called ‘crop factor,’ whereby the physically smaller sensors cropped some of the picture. With full frame cameras, there is no crop factor. You get the full image.

At four thirds the size of a full-frame camera sensor, four thirds sensors offer a compact (and less expensive) alternative. For your everyday user, a four thirds sensor will serve you just fine. However, keep in mind that the comparatively lower ISO performance will make it more difficult to shoot in low light, so you might have to worry about noise. These crop sensors will also give you a smaller field of view.

These little 1” sensors are mostly for compact cameras and some smartphones. They collect less light than either 35mm camera sensors or four thirds. However, they’re still useful in beginner level cameras. The Sony RX100 series, as well as Panasonic Lumix TZ100 and Panasonic DMC-LX15 all use 1” sensors.

Camera sensor size is mostly important because it affects how much light reaches an image. Bigger sensors translate to bigger pixels, which collect more light. Plus, large sensors can accommodate more megapixels to expand your image for printing. If you’re a beginner, a 1” sensor in a point and shoot will suit you fine. For beginners looking to move into the hobbyist realm, four thirds sensors offer many of the benefits of a full frame at a lower price. Medium format is a nice niche for enthusiasts and professionals, but the standard 35mm full frame camera is the baseline against which all other sensors are measured.