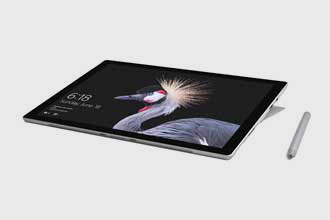 Announced last October but now available to the general public, the new Microsoft Surface Pro with LTE Advanced is a work-anywhere device for creatives and business professionals who know that inspiration can hit at any time.

There’s some question as to whether you really need LTE connectivity, and we are here to say yes. Don’t hunt for sketchy public Wi-Fi! Especially if you live in a city, the difference between slower networks and LTE is super noticeable. With the Surface Pro LTE Advanced, seven custom antennas keep you connected. Ideas come at you fast, but LTE connectivity matches your creative speed.

The 50% longer battery life and faster startup means the Microsoft Surface Pro with LTE Advanced is a great work-anywhere device. With 13.5 hours of video playback, you can power through final projects with ease.  Plus, the new fanless cooling system makes it even quieter – so you can work without disrupting anyone.

Quick and versatile, the Microsoft Surface Pro with LTE Advanced delivers. Put your security and speed concerns to rest with seamless LTE connectivity. Work where you like thanks to fanless cooling, longer battery life and extended video playback.